Back to all posts

Ten Best Performances of Its Not Dead (a review) 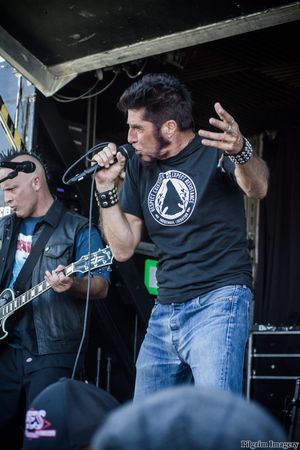 Looking over the crowd at “It’s Not Dead 2” at Glen Helen Amphitheater in Devore Saturday, Aug. 26, there was a mixed sea of ages, ethnicities and fashions. It seemed as if more people had turned out because of the popularity of festivals than of punk.

The stage names were probably lost on the bulk of the audience, too, as the smaller stages referenced now-defunct iconic Southern California punk venues — Cuckoo’s Nest (Costa Mesa), Fenders (Ballroom, in Long Beach) and Olympic (as in Auditorium, Los Angeles). The main stage honored Gary Tovar, who founded Goldenvoice to promote punk shows long before it was a national festival juggernaut, and the late Mike “Gabby” Gaborno, the lead singer of the Cadillac Tramps and Manic Hispanic who died in January.

However, both punk bands and festivals are noted for putting out compilation discs, here are our picks of who and what we would put on our “It’s Not Dead 2” record.

Channel 3: Their most outstanding number was “Manzanar,” a tune about the Japanese-American internment camp during World War II. “They didn’t exactly teach you that in school,” Channel 3 lead singer/guitarist Mike Magrann said of the song backstage after their performance.

Reagan Youth: This band got together not simply to make music, but because they had something to say. And for a great example of early ‘80s political punk, “Reagan Youth,” with it’s chaotic, changeable beat makes the cut.

The Interrupters: “It’s Not Dead 2” promoter Kevin Lyman touted this ska/punk group as “the future of punk.” As they dove into their tune, “This is the New Sound,” one young fan said she had seen The Interrupters four times and adores them because they are “upbeat and you can dance to them.” The large audience certainly had a hard time keeping still during this song.

GBH: “Knife Edge” is the hands-down winner here. Dust was rising from the mosh pit and suddenly a man in a wheelchair appeared surfing the crowd, chair and all. Now that’s punk.

UNIT F: The Cuckoo’s Nest consisted of a trailer stage away from everything else and was a bit hard find, but Unit F’s fans turned out and grew during their show. The best treat was “Decay” off the new album, “Ecocide: Songs of Dysfunction,” about how we are ruining the environment and ourselves. It’s a wake-you-up tune and that was met with the crowd’s approval.

Buzzcocks: Long before Green Day brought pop into punk, there was the Buzzcocks. Their pop-punk grooves were at their height in “What Do I Get?,” a tune about longing for a lover and only losing sleep. They also got a big applause.

The Adicts: It’s hard to pick one song with the theatrical and exciting show this group put on, but what was most impressive was the ability of lead vocalist Keith Warren’s ability to go for a laugh and pull it off with finesse. He already awed the crowd with his sparkly silver slacks and towards the end of the set donned a Chinese takeout box costume for “Chinese Takeaway.” Adding to the fun, he opened a normal sized takeout box and used chopsticks to pull streamers from it and tossed them into the pleased crowd.

Dropkick Murphys: There was an audible “Oh!” from the audience when they announced they were going to perform “Rose Tattoo.” For this soulful song, they invited record producer Ted Hutt to join them onstage with an acoustic guitar and had the bulk of the crowd singing along, too.

Rancid: Although at this point in the show there were several small groups of people glued to their cell phones watching the Mayweather/McGregor fight, everyone paid attention when the group dedicated “It’s Quite Alright” to Mike Gaborno. It was the most moving moment of the festival.

Encore: Dropkick Murphys and Rancid combined forces to end the evening with a short set of cover tunes. Johnny Cash’s classic “Folsom Prison Blues” was an unexpected number that showed the true talent of the two bands and how many musical genres can shine through in punk.

Michelle Mills has been an entertainment and features reporter for the Southern California News Group since 1999. She has interviewed such notables as "Weird Al" Yankovic, Glen Campbell, Alice Cooper, Debbie Allen, Ernest Borgnine (during an earthquake) and Adam Young (Owl City). She was the 31st Occasional Pasadena Doo Dah Parade Queen reigning 2007-2009. She is a professional belly dancer (swordwork is her specialty) and also studies Polynesian and Tahitian dance.

Decay from Ecocide: Songs of Dysfunctio